(As featured on Bend Magazine online)

Rock chucks, or yellow-bellied marmots, are a common sight among the boulders in Bend’s Old Mill District. 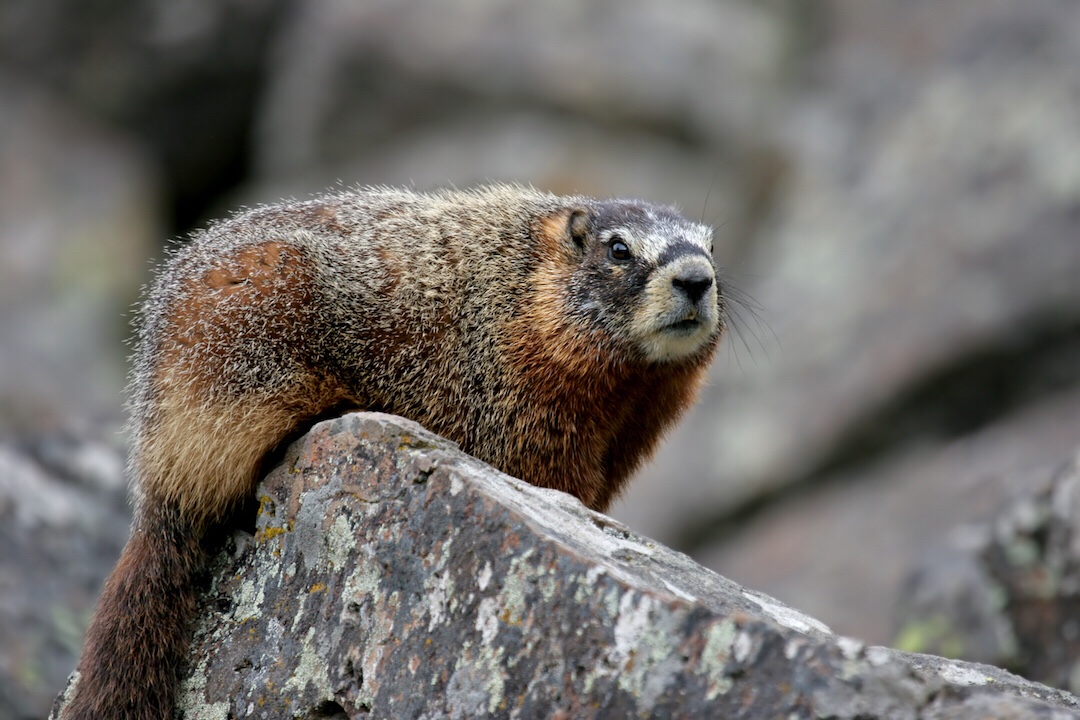 Rock chucks are a beloved sign of spring in Central Oregon. To many, their emergence from winter hibernation signals the end of frigid weather and the arrival of warmer days and sunny skies that usher in the outdoor adventure season for Central Oregonians. But what exactly are these creatures?

Named for their typical choice of habitat, rock chucks prefer to make their burrows under rocky cropping near a consistent food source that can satisfy the hunger of even the roundest and most stoutly built individual. They inhabit much of the Western United States, often found in high elevation areas with open land such as sagebrush or meadows.

Rows of rock chucks can be seen along the roadsides in the Old Mill District, where perfectly groomed lawns, a primary food source for these marmots, allow for a keen view of any potential predator. Although the brunt of their diet consists of herbivorous eats, rock chucks are actually omnivorous opportunists who will take advantage of feeding upon insects and even bird eggs that may be precariously laid by killdeer or nighthawks on the ground. In the Old Mill District, however, you’ll probably just see them snacking on grass. On a sunny but cool early Sunday morning, this is where I would spend my time observing.

A naturalist is taught the art of observation, reading the landscape and natural behaviors of their subject in a broad sense and in an attempt to gather specific information. This can take hours of painstaking notes and illustration. This is not a method I would suggest for our friend the rock chuck. There is not much activity to speak of, as a matter of fact. Upon even the earliest moments of my observations, I can assure you that rock chucks do almost exclusively what you have likely viewed in your short moments of seeing them as you drive by. They eat. A lot. Moving from one square patch of grass to the next, seeming to pay little mind to us. But their face-down tendency towards constant caloric intake may be their most enduring quality.

For spending much of their time only feet from the hustle and bustle of Southwest Bond street, rock chucks are surprisingly skittish. Within as little as ten yards distance from them, they each would quickly scurry up the hills and into their burrows, easily escaping my intrudance. This is a typical tactic used by the rock chuck to escape predation. Although it is nearly inaudible by human ears, rock chucks even sound the alarm to their fellow rock chuck family members when they come across any natural predators, which would most likely be dogs and eagles in the Old Mill District.

The rock chucks are famous in Central Oregon, garnering more than 3,200 followers on Facebook, complete with their own hashtag campaign, #omdrock. Enduring and iconic, the rock chuck remains a delightful sight along the roadsides of the greater Central Oregon area. Not much to say, and even less to show. But perhaps that’s precisely what we find most charismatic about them.

To hear more from the friendly neighborhood naturalist, be sure to check me out online or find me on Facebook and Instragram.